If you are having issues logging into the conference website please go to https://gcfv.georgia.gov/news-and-events/2020-annual-conference

Section 2. The Foundation of a Family Violence Task Force

When organizing a FVTF, GCFV recommends approaching this work through a coordinated community response (CCR) framework. GCFV believes that a CCR is the best way to address the problem of family violence. A CCR means that every segment of the community - including judges, advocates, law enforcement, medical professionals, educators, and concerned citizens - is responsible for helping to end family violence. A CCR is also a strategy to effectively implement laws and policies that protect survivors from further acts of violence and hold offenders accountable for their criminal behavior.

At the heart of a CCR is a shared understanding by all agencies and community members involved that family violence is a crime and a human rights violation, and that the response to it must prioritize the safety and autonomy of the survivor. Another key element of this approach is ensuring perpetrators’ accountability and providing them an opportunity for change.

FVTFs are CCR teams in local communities that change and improve the way systems work together to end family violence. It is important that FVTF members approach family violence as a social issue that requires systems to adjust their policies and procedures, rather than an individual problem.

The American Medical Association describes the characteristics of a CCR: “Generally, [a] coordinated community response (1) work[s] to create a network of support for victims and their families that is both available and accessible; (2) use[s] the full extent of the community’s legal system to protect victims, (3) hold[s] batterers accountable and enforce the community’s intolerance of domestic violence; and (4) engage[s] the entire community in efforts to change the social norms and attitudes that contribute to domestic violence”  (adapted from the American Medical Association, Family Violence: Building a Coordinated Community Response 1996).

A study of 41 domestic violence task forces suggested that task forces “provide a promising venue for the promotion of community change. For example, by facilitating relationships across sectors, they have the potential to identify weaknesses in the current community response” (Allen 2001). This research also found that task forces which have an inclusive climate (characterized by effective leadership, shared power in decision making, and shared mission) and active participation from a broad array of stakeholders were rated as more effective by members and leaders (Allen 2001).

The foundational principles of victim safety and perpetrator accountability upheld in the Duluth Model are central to the goals GCFV promotes for FVTFs in Georgia.   The Duluth Model was first introduced in 1981 in the city of Duluth, MN; its purpose was to ensure the implementation of the State of Minnesota’s Domestic Abuse Act.

The model was co-organized by Ellen Pence and Michael Paymar as a way to approach how a community works together to end domestic violence. Pence and Paymar worked with systems to address the issues in their community by bringing together stakeholders such as survivors, law enforcement, prosecutors, judges, probation and mental health professionals.

Effectiveness of the Duluth Model

Research on the effectiveness of the Duluth Model has shown has shown that “68% of men who pass through [their] criminal justice response and are sent to the men's nonviolence classes have not reappeared in the criminal justice system over a course of eight years. The strength of [their] intervention model comes from basing every intervention firmly on the experience of women who have been battered, coordinating a consistent criminal justice system response for men who batter and offering men opportunities for change” (Miller 2016). It is important to note that the Duluth Model response involves the commitment and coordination of a range of stakeholders who are invested in addressing domestic violence.

Core Elements of the Duluth Model

The Duluth Model is characterized by:

The model holds that the goal of any intervention should include:

Generally, when working together in the Duluth Model, there are four primary strategic principles of inter-agency interventions: 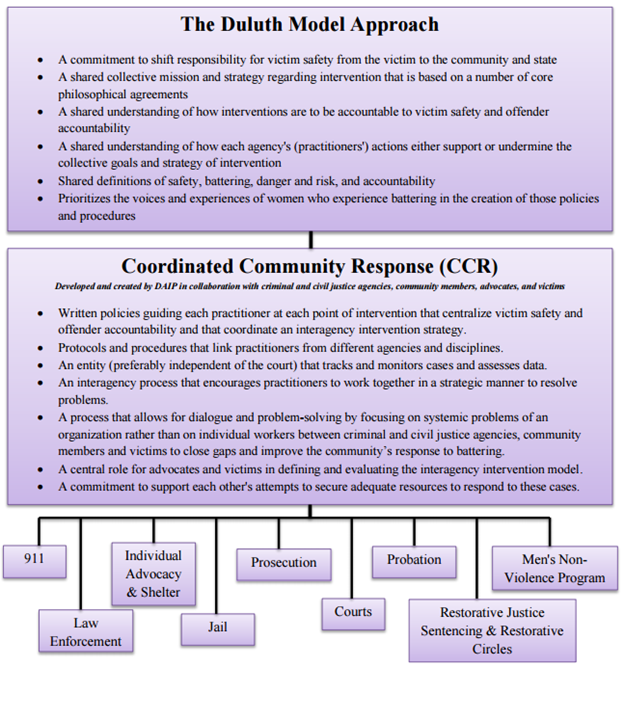